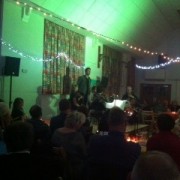 Last Saturday night Sacconi played in our school hall! They were joined initially by Charles Owen (piano) and the Royal College of Music Chamber Orchestra to play Britten’s  Variations on a Theme of Frank Bridge, then Bach’s Piano Concerto in D minor and finally Mendelssohn’s Octet in E flat major. This was really enjoyed by those who went.

They then played again and people were able to hear Jon Boden sing with then whilst they played performance of ‘The Juliet Letters’, which was written by Elvis Costello and the Brodsky Quartet. This award winning Folk Singer was really well received.

It is very exciting to have them play in our school and we look forward to them returning year.