St Eanswythe’s Church of England Primary school is named after Folkestone’s very own Saxon saint. The young princess turned nun is buried in the Parish Church on the opposite side of the street.

St Eanswythe was an Anglo-Saxon saint who first established the Christian church in Folkestone and whose name is given to the parish church. Born circa 614 Eanswythe was a Saxon princess. Her parents Eadbald King of Kent and Emma daughter of the King of the Franks. Eanswythe’s grandparents were King Ethelbert of Kent and Queen Bertha who both welcomed St Augustine when he arrived in Kent in 597AD.

Circa 630 AD Eadbald built a chapel for Eanswythe in his castle somewhere in The Bayle, east of the present church in Folkestone. This chapel was dedicated to St Peter & St Paul. Here Eanswythe settled with a community of nuns as Abbess and Founder of the first religious Community for women in England. The date of Eanswythe’s death is usually given as 640AD. The monastery did not survive her, being either ruined by marauders or victim of coastal erosion or perhaps both. It was later replaced by a Priory which remained until the Dissolution by Henry VIII.

Several legends are told about St Eanswythe. Her story is that she chose not to marry and refused a Northumbrian prince as suitor.

St Eanswythe’s Day is on 12th September. This is the date when her relics were translated to the new church in 1138. These relics were rediscovered in a small leaden Saxon casket in the north wall of the High Alter Sanctuary in 1885, when work on the present alabaster arcading of the chancel was being undertaken. In 1980 the bones were examined and catalogued by an expert. The conclusion was that they came from one human skeleton, a young female adult aged between 18 & 25 years about 5’4″up inches in height. This is consistent with Eanswythe’s life story.

The foundation stone in the school’s wall gives the date for the setting up of the Woodward Institute and School at the turn of the previous century.

At various times it has been just for boys or purely a junior school. During World War II many people from Folkestone were evacuated, as were most schools.

The school was noted for swimming, at the seawater baths behind Marine Crescent, cricket, played on Radnor Park with a hard ball and singing, providing members of several church choirs.

Parents of some of the present children remember being taught by Peggy Jameson in the infant department, David Bence for the juniors and Harold Jameson, the head, in the top class. As a linguist the Head encouraged French, with trips abroad. He could be found outside the archway’s forbidding gates seeing the children out every evening. Like the “Windmill Theatre” he claimed never to close, the hardest winter finding Rob Moody’s class lighting the playground with candles in ice lanterns. 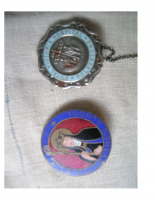 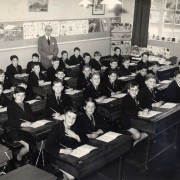